As Darren Meyer spoke to the Ministerium of Ideas, I could feel a growing sense of excitement and bewilderment fill the room.  In a clear, logical way, using many slides and statistics, Darren was telling us a story about our neighborhoods and nation that we hadn’t heard before.  As he talked, I found myself grasping at each node of thought, each specific statistic, and wishing that I had hours to sit and consider it.  The last decade has seen a reversal of the driving boom that started at the end of World War II – people are driving less and for shorter distances than they used to.  In the next thirty years, racial and ethnic minorities will account for almost all population growth in Ohio.  In the last decade, there has been an overall move back into cities, which are now often safer and and have better public services than the suburbs that people once fled to.  And I kept thinking about how many of our faith communities are commuter communities, serving parishioners who drive far distances to attend, and how many of our faith communities aren’t integrated and make little effort at integration, and how we’ve been closing urban churches in the very neighborhoods that are becoming revitalized.

Darren talked about how public services in Ohio are funded through income tax, which means that cities need business offices and factories to pay for trash pick-up and park maintenance, and will offer property tax incentives to corporations that move into them.  But public schools aren’t funded through income tax, but property tax.  In 1991, owners of residential properties paid 48% of the costs of schools.  By 2011, they were paying 70%.  In neighborhoods where there are high property values, the schools can do quite well.  But in poorer neighborhoods, the schools will always be worse off.  While he talked, I thought about the people who live in our neighborhoods and sit in our pews, bearing all of these fears about their children’s education, and how seldom we talk about property taxes and school levies in our faith communities.  As Darren pointed out, safety, education, and economic opportunity are basic needs in our neighborhoods.  Shouldn’t our concern for social justice center around these needs?

So how can we help city governments and school boards create and sustain great neighborhoods?  Architects like Darren start by identifying enduring bright spots – historic buildings and institutions, geographical features like rivers and lakes, and city parks and village greens.  Faith communities are often historically rooted in a neighborhood, but, too frequently, they’ve closed themselves off from that neighborhood and limited their ability to stand as enduring bright spots.  How could we change this, I wondered?  Darren told us about other institutions – libraries, museums, hospitals – that have changed their images and their community impact, beginning with a process of genuine engagement with the community.  Public-private partnerships are important.  For Darren, who was the lead architect on Columbus’s Scioto Mile project, there is something deeply exciting about bringing civic groups, corporations, and non-profit institutions together for opportunities to dream about what a neighborhood should be like, and what needs its public spaces, its parks and squares, can serve.  But the truly exciting moment comes when the park is built, and people who didn’t help plan it start showing up and using it in unexpected ways.  For him, this is the sign that it’s a successful public space.

All week, I’ve been wondering if our faith communities can follow the example of public libraries, which Darren identified as a key third place within these revitalized neighborhoods.  The rise of the internet meant that libraries had to change their focus, since they were no longer the primary portal to information in our communities.  They expanded their service to their neighborhoods and develops programs that brought the community in.  What would it be like if a church or a synagogue created a calendar of programs for neighborhood kids, with no other motive than being of service.  Our buildings are tragically underused.  After Darren finished his talk, the members of the Ministerium began to think and dream about how to change this.  Could we remove the pews from our sanctuaries, and invite people in to do yoga, like they have at Grace Cathedral in San Francisco?  Could we host after school programs, plays, recitals, parties, movies?  Could we spend time with neighborhood partners, figuring out what they need, and then lend our resources to meeting those needs?  Can we, in short, become enduring bright spots in the revitalization of whole neighborhoods?

Twelve years ago, Pete Anderson went on sabbatical from his position as a Professor of Material Science and Engineering at OSU.  Although he and his family were living out of state, he found himself returning to Ohio through the course of the year to check on programs and experiments that he was in charge of.  To save costs on lodging, he bought a sofa sleeper which he put in his office on campus.  It was living in these cramped quarters, a few paces from the desk that he worked at, that sent him out onto the campus on a Sunday morning and brought him to Saint Stephen’s Episcopal Church.

As he’s grown older, Pete says that he’s come to value collaboration more and more, especially as he’s gained some sense of the limitations of his own creativity and ingenuity.  A few years ago, he became involved in a project to grow engineered skin.  He was at a cross-disciplinary campus meeting, where he met a burn specialist attached to OSU’s medical center.  When he spoke before the Ministerium of Ideas last week, he told us that the key to such collaborations is finding a person with a great passion.  The burn specialist he met had spent several years treating people with severe burns, and knows how pernicious infection is for treating this kind of injury.  Pete agreed to her vision of speeding up the process of creating skin (in vats, from the patient’s own cells), and they enlisted two others to help in the effort.

For Pete, this is the central insight into strong collaborations.  Someone with vision and passion needs to be the catalyst.  Others need to align themselves with that vision and bring their own skills and talents to bear.  Like all the questions we examine in the Ministerium, this insight presents us with an opportunity to act.  Who in our neighborhoods and faith communities have the most passionate visions, and how can we help people articulate those visions, and support them? 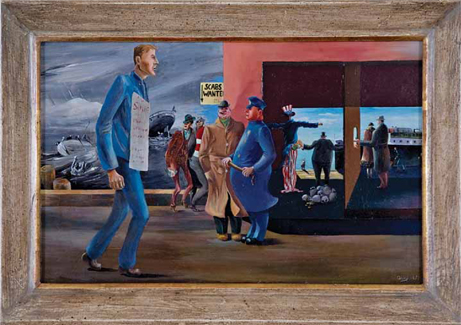